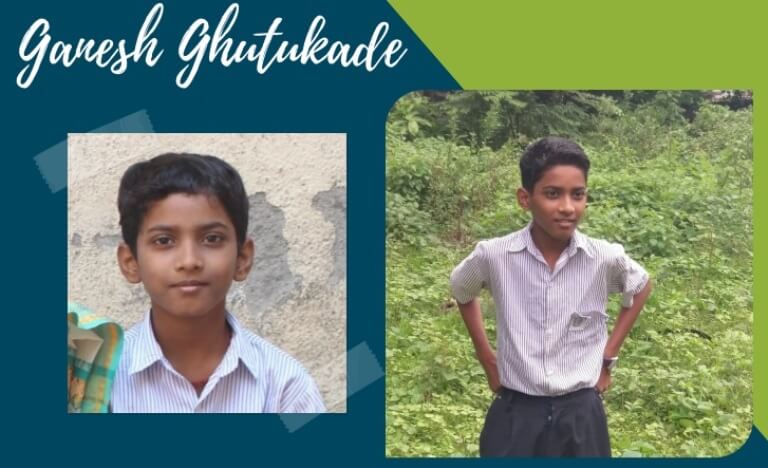 Ganesh Ghutukade is a helpful guy from Saibaba Path MPS who has currently entered the 8th grade. His father, Dada Ghutukade, is a store assistant in an office and mother, Nanda, is a house wife. When Ganesh’s parents were looking out for a good school to enrol their son in, they came to know about the Saibaba Path school. They found that this school was popular in the community in Jijamata Nagar. Ganesh joined the school in Sr Kg and has since performed to his outmost potential.

In the 9 years spent here, Ganesh has grown very fond of this school. He loves the sports activities in particular and yet another reason why he loves the school is due to his teachers that he is so very fond of. According to him, the methods that the teachers adopt to teach their students and their acceptance towards any difficulties the student would face is what Ganesh tends to be content with. He Is appreciative towards the manner in which they clarify his doubts when a concept is not understood and attempts to be as helpful as them, towards his fellow classmates.

After a significant interaction with Ganesh, he opened up to tell us that his favourite subject was mathematics and that he finds numbers and figures appealing. He is quite inclined towards solving issues and considers the teaching method with projectors quite brilliant. As a bright student that secured the 1st prize in the competition organized by Sanskriti Sanvardhan Pratishthan and earned the Ramayan scholarship, Ganesh is a curious and knowledge seeking guy that tends to challenge himself with anything that helps with his “Brain Growth”. He is also a very helpful guy and his best friend Gopal and he tend to share this similar quality.

Ganesh has also developed an interest in sports activities in school like Taekwondo that he recently won a gold medal in and is attending the Taekwondo training provided by the school.

Other sports that he has excelled in are running and Langadi and got selected for state level competition inn football and got a gold medal for Langadi. To say the least, he is quite a smart and active child. He considers the world-renowned cricketer Virat Kohli as his role model and aims to become of a status to meet him personally someday. To add to his all rounder personality, Ganesh is also creatively inclined towards drawing. Ganesh participates in many activities in school and with the support of his parents and teachers excels at most. His mother is proud of what Ganesh has achieved so far and prays for more success in his life. According to his mother, Ganesh is a helpful, supportive, exceling child that should be selective in the field he chooses to become to be the best at what he does. His parents support his dream of becoming an engineer and is accepting of his passion towards architectural engineering. His mother is very happy with his progress.

“The school has changed my son in many ways. With increased interaction in the school, he has begun to open up and share more with us, especially with his father”
“We want Laxmi and our other children to do better than what we ever could do.”
–Laxmi’s parents
His parents have a lot of faith in the school and believe that Ganesh will grow up to be a successful individual. This belief of the parents in the school is the biggest strength for Educo. Building the different skills of the students and contributing to their holistic development would definitely help us achieve a substantial change in the community.